Do you think black holes are interesting news? If one blew up would you think ‘Aww poor black hole!’ Or are they frivolous details with no relevance to the world around us?

What about a plane crash that kills 500 people?

Join Tim and Algy  (and a cameo by Diva-Muffin the Barista) as they battle it out for the attention of the world’s media, by anthropomorphising celestial objects and immorally manipulating the feeling of the readership. Yes, immoral!

Sound dubious to you? Sounds like good honest journalism to me. Find the real story, the human story, the heart of the matter… Aww poor black hole!

Part of the Stir-Fried Science Show, at Smiths Alternative in Canberra. April 8, 2021.

Leapfrog by Phil Dooley – listen to the whole song here.

Here’s one for the flower-loving ecologists, featuring Brittany Brockett. 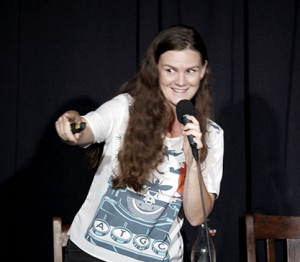 Hey they’ve found the wreckage of the plane that crashed.

Aww, one of the passengers was a little girl

The news, it just brings you down,

it’s all these disasters and celebrity weddings.

of sadness for each one of them & you never even knew them.

What! Immoral?
–Yeah, in a consequentialist sense

By focussing on one person and making us sadder than

we were before, they’re just increasing the suffering

in the whole Universe.

Look. The news is about what’s happening now. It’s topical!

they’ve ever experienced in the whole history of the cosmos!
When?

No, but we detected it this week!

[sigh] Did anybody die?

Were there any cute photographs?

That’s not the point! The point is that two

black holes collided, and they made gravitational waves

that travelled through spacetime for 1.3 billion years

and then we detected them here on earth,

it’s an amazing feat of technology

So, OK. Let me get this straight. Two dark holes

They smashed together. Maybe one of them died

Or, maybe they were joined together, forever, in eternity!

Or both. I can see the headline now