The Poet’s Guide to Science by Michele Conyngham

The Poet’s Guide to Science is a thought-provoking and hilarious play about today’s scientific dilemmas, featuring cameos from real scientists discussing their research.

Since selling out its first show in Canberra in Science Week 2018, The Poet’s Guide to Science has gone from strength to strength, playing at Questacon (National Science and Technology Centre) as part of 2019 Enlighten Festival in Canberra, and the 2019 Adelaide Fringe Festival.

Born of a collaboration between writer/director Michele Conyngham, actor Patrick Trumper and science communicator Dr Phil Dooley, the play showcases local scientists, and gives them a platform to discuss their work and its controversies with the community.

Synopsis: Cy has lost his faith in science. So he goes to see his local doctor, but he finds no answers, just more questions. Soon he has drawn the doctor into his crisis, and they embark on an adventure to resolve the questions that dog them both.

On the way they run headlong into scientific controversies and encounter scientists from controversial research areas who cast light on age-old questions of facts and data, doubt and uncertainty, belief and scepticism.

Each show features a fresh line up of scientists interacting with the characters in the play. It’ll have you laughing AND thinking!

“The play was rich with ideas, cleverly written and very funny as the audience, two actors and three guest scientists were brought together to look upon ‘the meaning of life, the universe and everything’ through the differing and overlapping lenses of the arts and sciences. Michele Conyngham’s dialogue was thoughtful, insightful and funny and the actors, Patrick Trumper and Phil Dooley, were great to watch.”

“A great play that addresses contemporary issues in society”

“This is a brilliant and entertaining hero’s journey through science, beliefs, fact, dogma and scepticism in the best sense of that word.”

“The show is great – and I recommend it to one and all! Enjoy the play – think deeply about science – and learn something too,”

GM or not GM? More complex than it seems. This excerpt from The Poet’s Guide to Science addresses the ins and outs of genetic modification with Dr Anne-Sophie Dielen.

END_OF_DOCUMENT_TOKEN_TO_BE_REPLACED

Immunology discussion with PhD candidate Harry Sutton.To jab or not to jab?

END_OF_DOCUMENT_TOKEN_TO_BE_REPLACED

The trailer to the hilarious play of science and scepticism the Poet’s Guide to Science.

END_OF_DOCUMENT_TOKEN_TO_BE_REPLACED 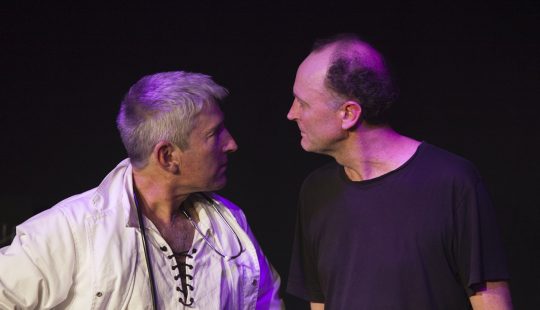 “A great fun play that addresses contemporary issues of science in society” Graham Durant, Director of Questacon, Canberra. “Michele Conyngham’s dialogue was thoughtful, insightful and funny and the actors, Patrick Davies Trumper and Phil Dooley, were great to […]