A science version of Oh When the Saints! I’m singing the hopes and dreams of every scientist. They dream of getting published, winning grants, tenure and  a Nobel Prize! In my experience, to have success in science you need to clone yourself – twice. And then a bit of prayer could be handy…

More of Phil solo at http://philuponscience.com.au. I created this video for AIP Physics in the Cloud, October 2021.

Apologies to Brian Schmidt, who was the original VC cited in this song (and whose name scanned better) but as this was a NSW-based show I had to switch to a selection of Sydney-based vice-chancellors. I apologise also to Attila Brungs – whose name we eliminated due to bad scansion.

If you’re wondering who the guy is wearing the sheet (yes literally) then you might need some background – watch the Minister for Vaccines sketch and it will all make sense. Actually maybe it won’t, but there’ll at least be a pattern in the non-sense! 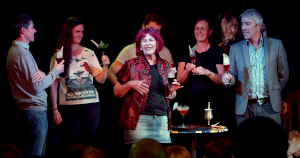 I thank the generation of musicians who brought the song into being around 100 years ago – there seems to be no single original composer, although a few have tried to claim it.

This is part of the 2021 Physics in the Pub/ Cloud, thanks to lockdown – which Phil brings you in partnership with the Australian Institute of Physics NSW Branch.

Look out for our Stir Fried Science live shows coming to a city near you in 2022. Canberra February, SYdney March or April and then… well if the pandemic’s over we could be anywhere! What a nice dream…