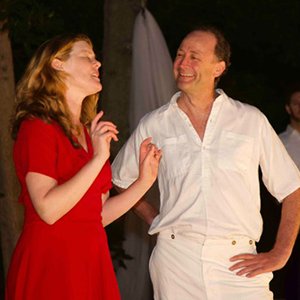 Eddie Farnsworth here. I know this article is about Patrick Davies, but I thought you might like to know a little about me! I’m the character who he is most proud of playing, and I am most famous for my turn in “Great Leaping Legends.”

“Legends”, as it is affectionately known, was a highly entertaining show penned by Michele Conyngham, who you will find elsewhere on this website. Here, in fact: Michele Conyngham – Dramatis Scientificae

“Legends” toured Australia for five years in the late ’80s and early ’90s. Five! I became an overnight star!

There have been a number of actors fortunate enough to play me, including Matthew Barneveld, Chris Burgess and of course Patrick, about whom this page is about.  As well as being an actor , Patrick is a teacher, a writer and a theatre director.

Rumpelstiltskin and the Case of the Disappearing Research Grants, Rhapsody on a Wet Day, The Train Station at the End of the Universe, Harvey by Mary Chase (2015),  Puss in Boots and Other Tales by Helen Martin (with Rebecca Jones). Crystal Clear.

I don’t have a stage name. I just use the name I was given. Edward Farnsworth is good enough for me.

There are lots of Patrick Davieses I suppose; and there’s only one Eddie Farnsworth – as far as I am aware.

He has his own page on this site as well – here: Inigo Bigot – Dramatis Scientificae